Well, to be more precise we made a puzzle-y, game-y type thing.

I am definitely unreasonably excited about this! pic.twitter.com/5ClM7YBgLa

I bought this dice bonanza bucket at Target during Christmas break.  I was very motivated to put the new dice to work for my students!

As I wrote about previously, one of my classes is studying algebra.  The contents of the dice bonanza varied between number dice, dot dice, color dice, and others it reminded me of Transition to Algebra like this:

So my assistant teacher and I put the dice to work in this puzzle game we called Dice ID.  Here is the instruction booklet and here is the game board.

And here is how it went in our class last Friday…

We started with round one, which did not pose an obstacle for the students so we moved quickly to round two:

I had the students working in pairs.  Each team rolled their dice…

Then the teams would work collaboratively to place their dice and chose which numbers the dice should represent so the equation would balance.

We even got an opportunity to organically investigate how negative numbers would effect the balance of the equations.  Since they needed to add the dice values, the students brought up adding negative numbers instead of subtracting positive numbers to get a lower overall value.

When I introduced the 20-sided die to round 2, it looked like this… 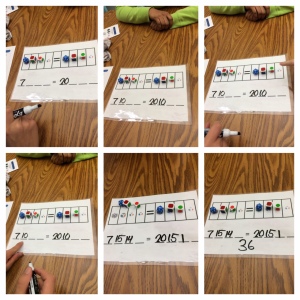 Then it got really interesting in round 3, because if the two smaller color dice were the same color, then they had to represent the same value!

The students had a great time and were solving problems that could have been presented on a worksheet instead of this collaborative game-like atmosphere.  My students live with a wide variety of disabilities (from autism spectrum disorders to down syndrome to speech & language processing disorders) which often leads to anxiety when it comes to attempting solutions to complex problems such as these.

This made me interested in the effects of math games on students with math anxiety.  So I asked the MathTwitterBlogoSphere!  I got a lot of thoughts on the matter, but nothing was definitive.  However, this response from Keith Devlin really rung true to me.  (Thanks Malke!)

@mathinyourfeet@mathhombre@bkdidact … commissioned by the game developer for internal use, so do not carry such weight, even if rigorous

If educators such as Jo Boaler and mathematicians such as Keith Devlin agree that math games (digital or analog) are great, interactive ways to engage our students with mathematics, why are there not more studies done on the effects? Thoughts?