Yesterday, I posted our intro to integer arithmetic using a problem set adapted from Project Z. Then a furious twitter session with Kent Haines and Michael Pershan led to today’s problem set. 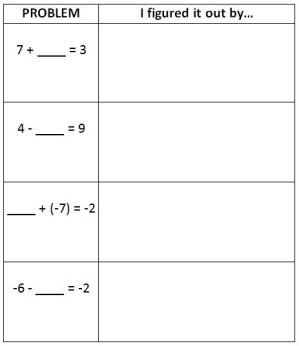 We had a nice initial clarification about the parentheses in the third problem. The students were comfortable with the structure of the activity where they had to concentrate on representing their thinking (although we still got “I figured it out by using mental math,” to which I asked him for clarification so I could better understand his mental math strategy). Then they were off!

If we had used a traditional workshop model (mini-lesson, work, share, and reflect) for this lesson it could have started with this…

Then we could have given them our worksheet and finally had them share their solutions. That would have been good, depending on the needs and characteristics of the students.

Instead we began with the “work” portion of the workshop model then moved to the “share” portion followed by our “mini-lesson” about making sense of the relationship between the operator symbol and the sign of the second operand, which led to great discussion of what it meant to take away negative or add more negative.

Finally, what came out of our sharing was that most students got stuck on the second problem. Some put 13 and some put -5. This led us to the final part of the workshop model, the “feedback and reflection” portion where students got feedback from each other and the teachers and had time to reflect on their original work.