The end of spring break means we are in the midst of our school’s spring financial literacy unit.  This is always a favorite of both students and teachers.  We ground our work in very concrete community related activities, such as going to the bank and going to the store.  Students love spending money and teachers love going on community walks in the spring and early summer. Everyone wins!

Before we start going on trips, I wanted to do some number sense work with my classes relating to the counting of money.  As we left for spring break I tweeted about an estimation idea inspired by counting money.

Money counting practice today led to this #estimation180 idea! How much money in the stack? @Estimation180@gfletchypic.twitter.com/0C8P1W49UR

Right on cue, Graham Fletcher, who writes his own amazing blog here, gave me some sage advice.

@bkdidact@Estimation180 maybe don’t share the chart piece up front and hold on until after initial guess. See who wants to change 1st guess

I took Graham’s advice and ran with it.  As much as we like our money math standards to relate to identification of coins and bills and getting accurate counts on prices and change, estimation is a key skill in any “real world” financial transaction.  When was the last time you stood at the supermarket register counting out the entire pile of change you got from the cashier? Generally, we look at the coins in our hand and make a quick estimate as to whether we think it is the correct change or not.  So I used the idea from my tweet, took some inspiration from fellow math teachers Andrew Stadel and Joe Schwartz, and turned it all into a financial literacy lesson.

Here’s how it went…

I just put the pile of money on the table and asked the students what they noticed and what they wondered about it.  Most of the students wondered how much money was in the stack.  Instant engagement!

The estimates just started flying organically! My focus for the students was to use mathematical reasoning to determine sensible too high and too low guesses which could help frame our final estimates.  One major change I made to the Estimation 180 framework was to have the students write their reasoning for each step of the process.  I gave them a recording sheet to help organize their thinking.  Deciding what was too low was a much more concrete idea for the students.  They reasoned that anything under $5 was too low because they knew it was at least $5 based on seeing the top bill.  The too high guesses had a much larger range and ended up being less helpful. 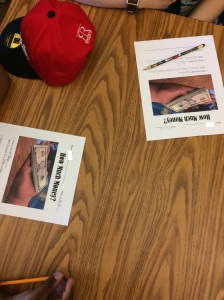 Here are some examples of student work: 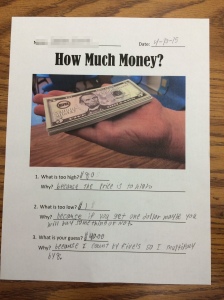 After we finished making our estimates, I used Graham’s advice to introduce some new information to the students.  The idea behind using the hundreds chart as a model was to introduce number sense information in a structured format.  The hundreds chart could also provide scaffolding for students who had not yet mastered counting by fives.  One of the students’ estimated $56.  This new information helped him realize that he needed to make a new estimate because 56 was not a multiple of 5, and thus was not a reasonable estimate. 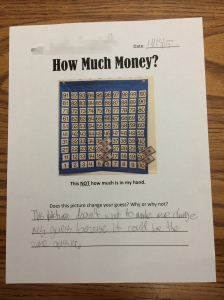 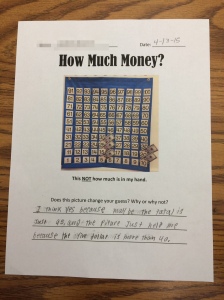 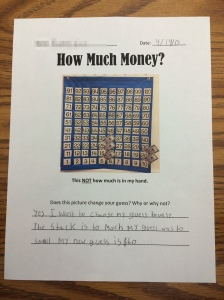 @bkdidact@Estimation180 sweet! Suggestion: take the $ stack picture at desk level & have a single note laying next to it. More accessible??

One of my colleagues had the same idea and sent me this paper which helped frame her thoughts while doing estimation work in her own class.

Finally, the answer was revealed.  The reveal is a major component of the Estimation 180 framework that I needed to keep.  I had the students complete a short reflection after they had investigated how close their estimate was to the actual amount.  I asked the students to think about what they would do differently next time they were asked to estimate about money.  This was inspired by the success students had with this meta-cognitive process during Open Middle tasks.

We still got in some money counting practice anyway!

Here are some of their reflections… 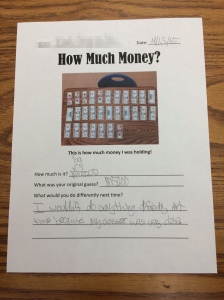 I am partial to the student who decided his estimate was close enough that he didn’t need to do anything differently.  Fair enough!

Next, inspired by Joe Schwartz’s blog post in which he created his own money estimation, we took our estimation practice a little further.  I used Joe’s pictures of different combinations of coins and bills in the same format from the activity the day before.

During the last activity Student #1 actually estimated it perfectly.  You couldn’t peel the smile off his face once we handed him the actual amount reveal. 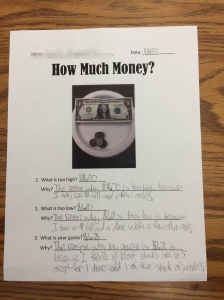 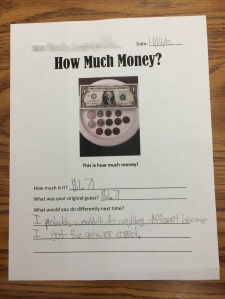 If you’re headed to Boston this Wednesday for the National Council of Teachers of Mathematics conference and you want to know more about helping students develop number sense through estimation go to Andrew Stadel’s presentation called, “Getting Students to Argue in Class using Number Sense Activities.”

1 thought on “Why Count Your Money, When You Can Estimate?”